The other day, I had a fascinating conversation with my friend and colleague, Paul Tobin. I had been thinking about using some kind of chaotic oscillator in a music synthesizer toy I’ve been playing around with and, since Paul is a gifted musician with a long-standing academic interest in chaotic systems, I was picking his brain about chaos. In about 30 seconds flat, he was able to jot down the bare essentials of a really simple system I could try out myself – the logistic map (you can read more about it here).

The basic idea is that you pick and r value, then iterate the formula many times to crank out a sequence of x_n values. Then you repeat the process for many values of r.

The code below generates a graph of the logistic map over a range of r values.

The above code is not very pretty, but it actually produces a half-decent (certainly recognisable) graph of the chaotic behaviour of the logistic map. The horizontal axis is the r axis. The vertical axis is the x_n axis. Basically, the program above generates a sequence of 10,000 x_n values for each r value. These 10,000 values are used to generate a single column of pixels in the image. 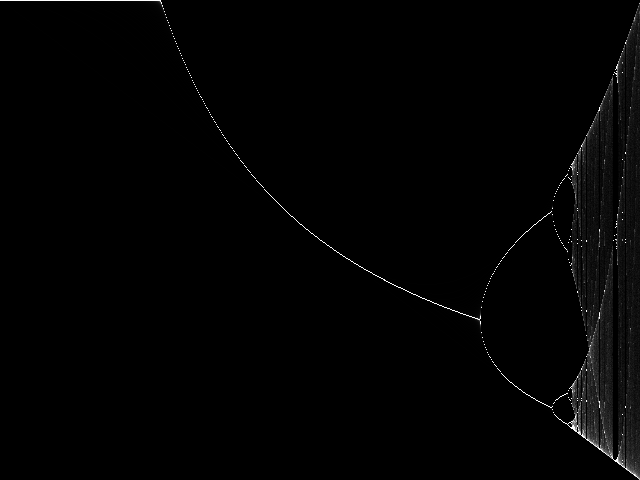 I then focused the graph in on the heart of the action by constraining r to the range 3 <= r <= 4. Here's what I got:

This entry was posted in Uncategorized and tagged bifurcation, chaos, logistic map. Bookmark the permalink.