I often need to send short character strings to a serial port in Windows. The sort of thing I might use this for is sending a command to a robot or other microcontroller-based device that I’m building using a USB-to-serial converter. I actually developed a small command line utility called SerialSend for doing exactly this, but in many cases you can get away without using any special programs at all. Instead you can just use Windows’ built-in echo, set and mode commands.

The simplest case is something like the following which sends the string “hello” to COM1 (the first serial port). You can just type this command into a normal Windows console:

There are a couple of potential snags though:

The following example is a more robust version of the command shown above:

This probably looks a bit confusing, so let’s break it down.

When used with the “/p” switch, the set command prompts the user to enter a value for the environment variable. The prompt displayed on screen is the string provided in the command. For example,

Of course, we’re actually not interested in setting the value of x at all – it’s just a means to a different end. All we really want is a way of outputting the string “hello” without any carriage return and line feed characters, and the set command just happens to provide a convenient way of doing it.

We don’t want the set command to sit around waiting for the user to enter a value for x, so the input to the set command is redirected from “nul” (i.e. no input at all, rather than input from the console which would normally be the case). This means that the command finishes immediately rather than waiting for something to be typed in. Input redirection is performed using the “<" character.

Finally, to configure the baudrate before sending a string to the serial port, the mode command can be used. For example, to set COM22 to 38,400 baud with 8 data bits and no parity checking:

Here’s a complete example as it appeared in my console window: 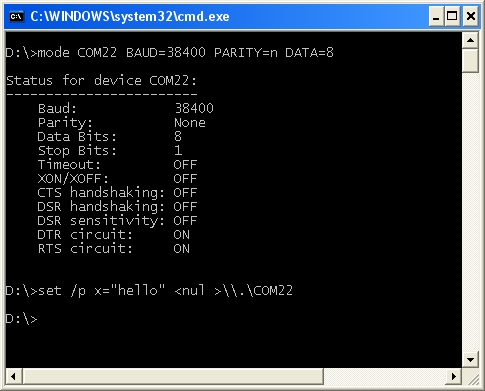